Everyone seemed to want to how far the shrinkage of Metal Clay Powder would go so for my next set of tests I decided to kiln fire everything at 900 deg C for two hours as well as doing a torch firing. I threw in a few other tests as well (could I bash it, how flexible was it), and on the whole was pleased with the results. 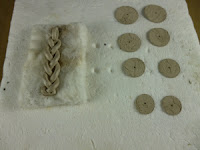 The first piece was made from plaited snakes which took shape very smoothly and easily with a snake roller and which didn't dry out or crack while I was constructing the pendant even though I took no additional steps to keep them moist. I also cut out and drilled four pairs of graduated discs for Wabi Sabi Bell earrings, and for these the clay was rolled out to 0.75mm thick then impressed with lace. 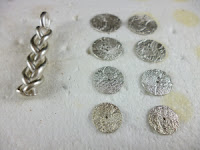 These pieces made up the first kiln firing and the shrinkage was substantial. The pendant had shrunk 17% in length and 24% in width, while the disc diameters had shrunk by 23% for all sizes. In terms of volume the discs had shrunk a staggering 40% The picture shows the pieces after they had only been brushed (the colours on the discs are due to the lighting) and very little additional finishing was needed. 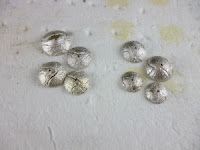 I wanted to see how well this silver would stand up to being hammered so the discs were headed for the doming block. Sadly, four of the discs (left of picture) cracked while being domed but on inspection it was evident that the cracks had occurred along lines in the lace pattern where the silver was particularly thin. Next time I'll make the discs a bit thicker if I am going to use the lace. I made another eight discs without a texture, again 0.75mm thick, and these domed without any problems.

Another project I wanted to try was a variation on the Shamrock pendant from the Art Clay Sweet Designs book. When I originally made this from Art Clay I had found it very difficult to get the individual components to stay in place while the joins dried, but I had no such problem with MCP. Made into paste with just water it seems to be quite sticky as opposed to simply wet. The high shrinkage in this instance was a drawback as the fine silver bail on the back resulted in the top of the piece being pulled forward - but it still has its charm. 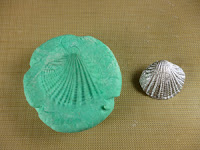 The last test I did from the batch of MCP I had mixed was a simple
cockle shell pendant, made from a silicone mould I made years ago. The silver took the detail very well and again there is a fine silver bail on the back. This piece I torch-fired for three minutes and by comparing the original mould to the fired piece it is easy to see that the shrinkage was high.

I still have plenty of clay powder left to carry on experimenting, and there are still several techniques I want to try. I have never fired anything I have made from silver clay at the minimum time and temperature recommended by the manufacturers and am unlikely to start now, but lower temperatures are going to be needed for glass and some gemstones. It will be interesting to see how robust the fired clay turns out at these lower temperatures.

Some time ago I came across a powdered silver clay that I had not heard of before, made by an American company that specialises in manufacturing powdered silver and silver nitrate to laboratory standards. I arranged to be sent a 10g sample and have finally got round to testing it. 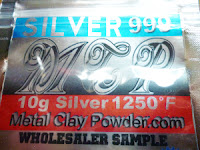 Simply called 'Metal Clay Powder Silver 999', a 10g pack contains 10g of silver plus 0.5g of binder, so the weight stated on the pack is the actual weight of pure silver you get. When mixed with water, a 10g pack gave me 11.8g of clay. 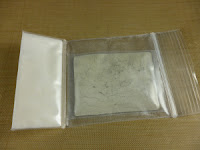 Unlike other powdered metal clays the silver and the binder are packaged separately, which is probably due to it being more convenient (and more accurate) for the manufacturer to do it this way. It is a simple matter to snip the corners off the packet and mix the silver and the binder evenly before adding water. The included mixing instuctions specify kneading for 4-5 minutes, but I followed my normal mix-and-roll-out method that I use for base metal clays and when reconstituting silver. This clay does need a 15 minute rest time before use as well.

In handling it felt more like ACS Slow Dry than other silver clays, and was very smooth. It took texture well from a burger box texture plate, picked up fine detail from a mould and rolled out to a nice smooth surface, even though I rolled, shaped and reworked it several times because I couldn't make up my mind what to make. 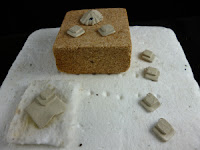 In the end I made three pairs of earrings and two pendants from the 10g pack. It was easy to make paste both from lump clay and sandings; drilling didn't cause chipping and the dried clay cut cleanly with a scalpel blade when I was trimming the edges of the shell mould. I didn't need to do much in the way of sanding before firing, and everything polished up quickly and easily, including those parts where I wanted a mirror finish.

The stated shrinkage is 12-25%, with maximum shrinkage occurring at the top end of the temperature range and with longer hold times. As all silver clays exhibit higher shrinkage at higher temperatures I expected this, but if shrinkage is 25% at 900 deg C then it holds out the possibility of a replacement for PMC Standard which many of us sorely miss.

I really like this clay for its handling, joining characteristics and plasticity. But maybe the best thing about this silver clay is the price; at the time of writing a 50g pack is $79.99; shipping is free in the US, and international shipping is $18.00. Which means I can get 50g of silver (approximately 60g of made-up clay) for about £66.00 (€76.00) which is way less than any other silver clay on the market.

The only drawback is that this silver clay only comes in 50g packs but it has an almost indefinite shelf life until it is mixed with water so it is very economical.

There's more about this product at http://www.metalclaypowder.com/ and it can be purchased from http://www.silvernitrate.org/ or http://metalclayalchemist.com/produits.php?cat=183 (Canada).
Posted by Unknown at 08:22 3 comments: